Keep up to date with the latest COVID-19 information for Tasmania - www.coronavirus.tas.gov.au

These projects will improve transport options for Kingborough. This means more people will have access to rapid public transport to the Hobart central business district, and public transport won't be limited to those within walking distance of the bus route.

The Southern Projects will support more people catching public transport by creating a more frequent and reliable bus network along the southern corridor, create safer cycling and pedestrian options, and improve the user experience across the network.

The Southern Projects are comprised of:

Kingborough Park and Ride – creation of two new park and ride facilities in Kingborough at Huntingfield and Firthside. This includes development of new southern suburbs bus services and an extension of the existing bus network.

Click on the image below to enlarge the location map. 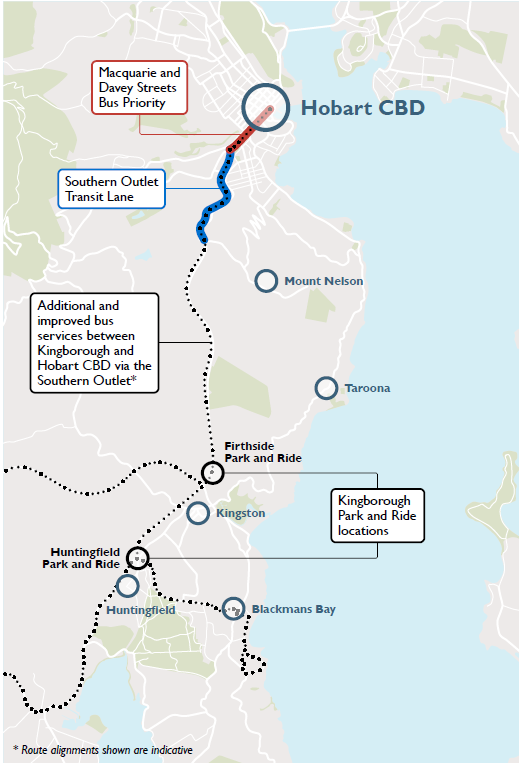 2What have we done so far?

We have completed a number of studies and engagement activities to inform the Hobart City Deal - Southern Projects.

In 2017, we commissioned consultants to produce a feasibility report for the provision of a transit lane for buses and emergency services on the Southern Outlet. While this initial concept report shows that the project is feasible, the project is highly complex and will require detailed scoping and extensive consultation with landowners and key stakeholders before a preferred solution is confirmed.

In 2018, we delivered an online public consultation about the current Southern Outlet bus lane. Feedback was sought on the issues that are important to people, such as travel times, public transport, safety and the environment. This consultation process attracted more than 340 responses, with many people supporting the bus lane and expressing frustration in relation to congestion and safety issues.

In late 2019, two focus group meetings were held in Hobart and Kingborough to discuss local issues and obtain feedback to contribute to the planning and design processes of the Hobart Transport Vision.

A summary report was provided to participants and is also available to download.

In early 2020, the Department engaged contractors to undertake preliminary survey works to inform concept designs for potential transport projects as part of the Hobart City Deal – including the proposed transit lane on the Southern Outlet, bus priority measures on Macquarie and Davey Streets, and two park and ride locations in Kingborough.

This was followed by traffic surveys that gathered data on vehicle movements around Hobart’s CBD to inform transport-related projects, including investigations into projects as part of the Hobart Transport Vision.

The public display will take place in two stages.

Stage one was for the Kingborough Park and Ride facilities and the additional and improved bus services. Public display took place from Wednesday, 18 November to Wednesday, 2 December 2020, and is now complete. We’ve summarised feedback into a consultation and feedback report. The feedback we have received has informed the development of the detailed designs for the projects. You can still view the concept designs on our interactive project page.

Stage two will be for the Southern Outlet Transit Lane and the Macquarie and Davey Streets Bus Priority, and will take place in the first half of 2021. Please keep an eye on the RoadsTas Facebook page for updates.

4About the Hobart City Deal

The Hobart City Deal is a 10-year partnership between the Australian and Tasmanian Governments and the Clarence, Glenorchy, Hobart and Kingborough councils. The partnership aims to:

It provides a framework to guide and encourage further investment in the city by embracing opportunities for growth and addressing key strategic and infrastructure challenges.

The Hobart City Deal will leverage Hobart’s natural amenity and build on its position as a vibrant, liveable and connected global city.

City Deal Partners are seeking to improve southern access to the City and reduce congestion through:

If you would like to get in touch with the team, please send us an email at southernprojects@wsp.com or give us a call during business hours on 1800 975 012.